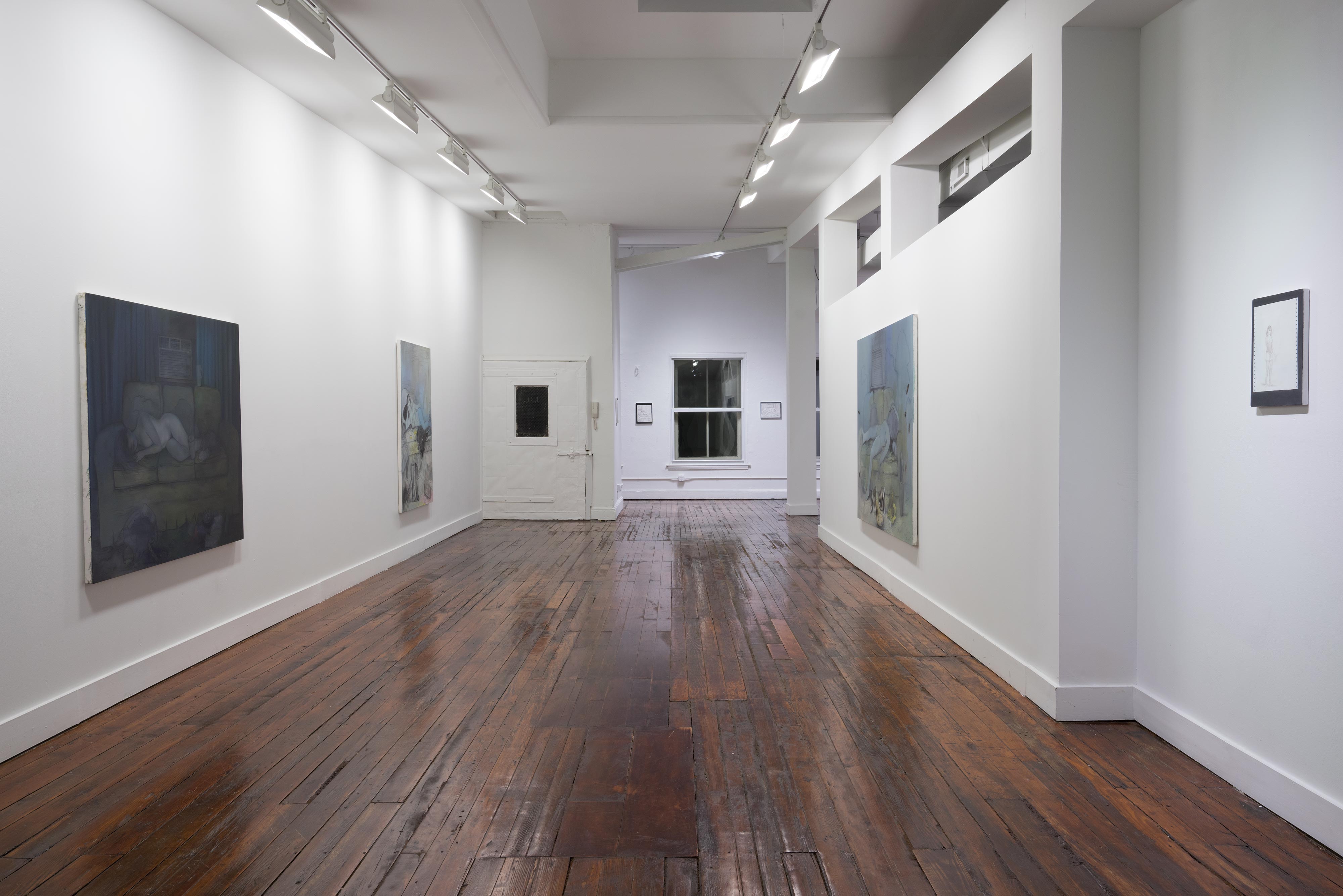 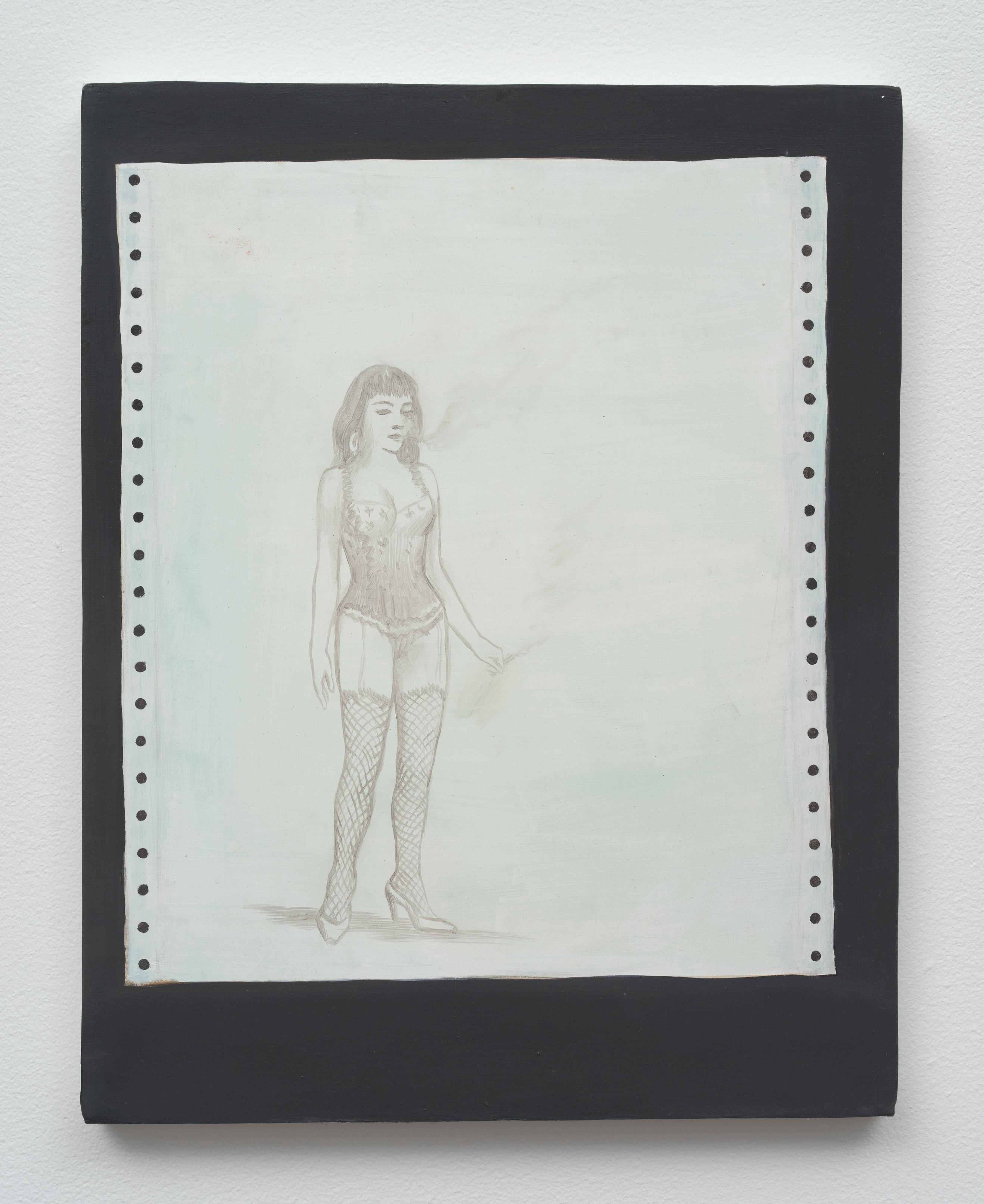 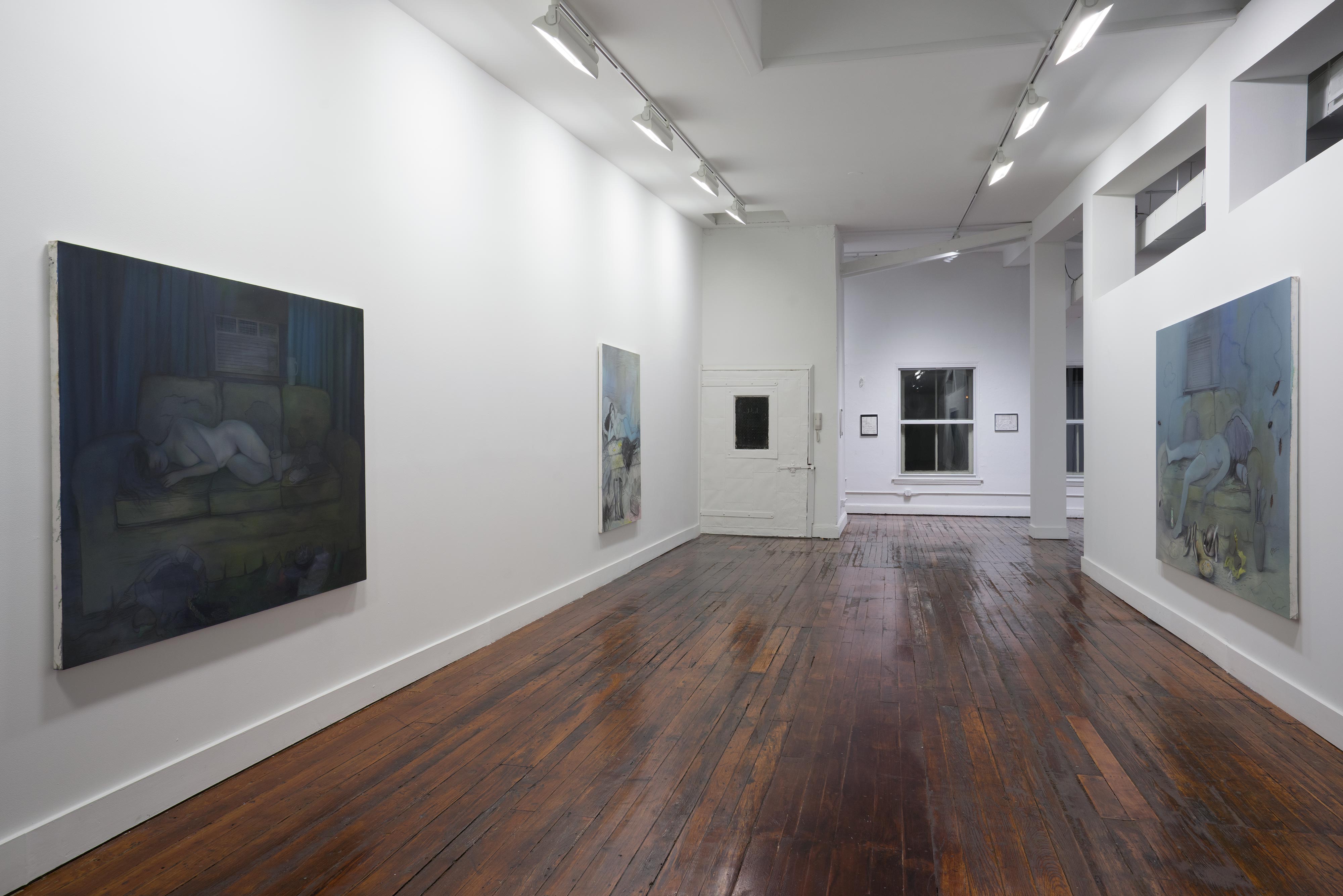 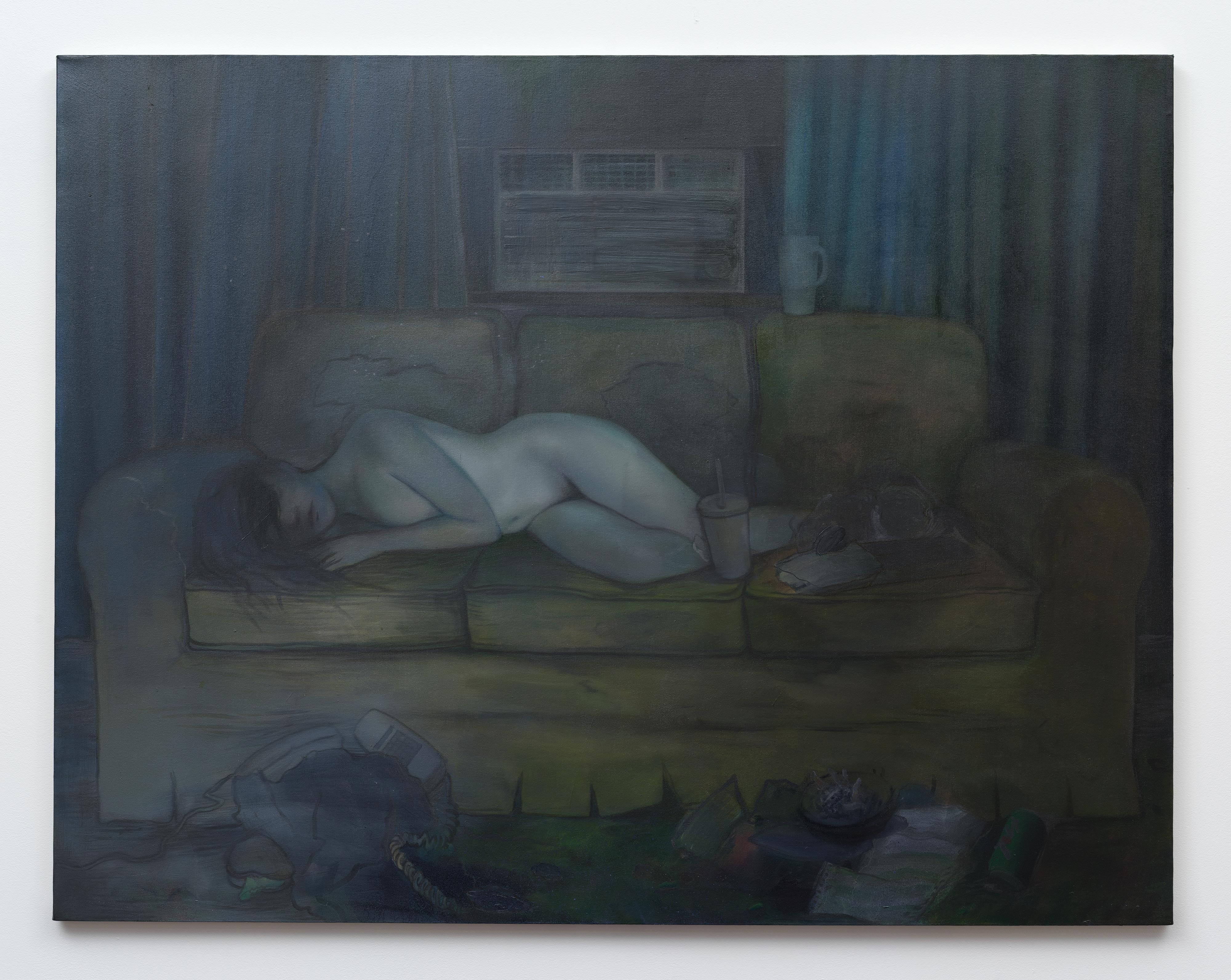 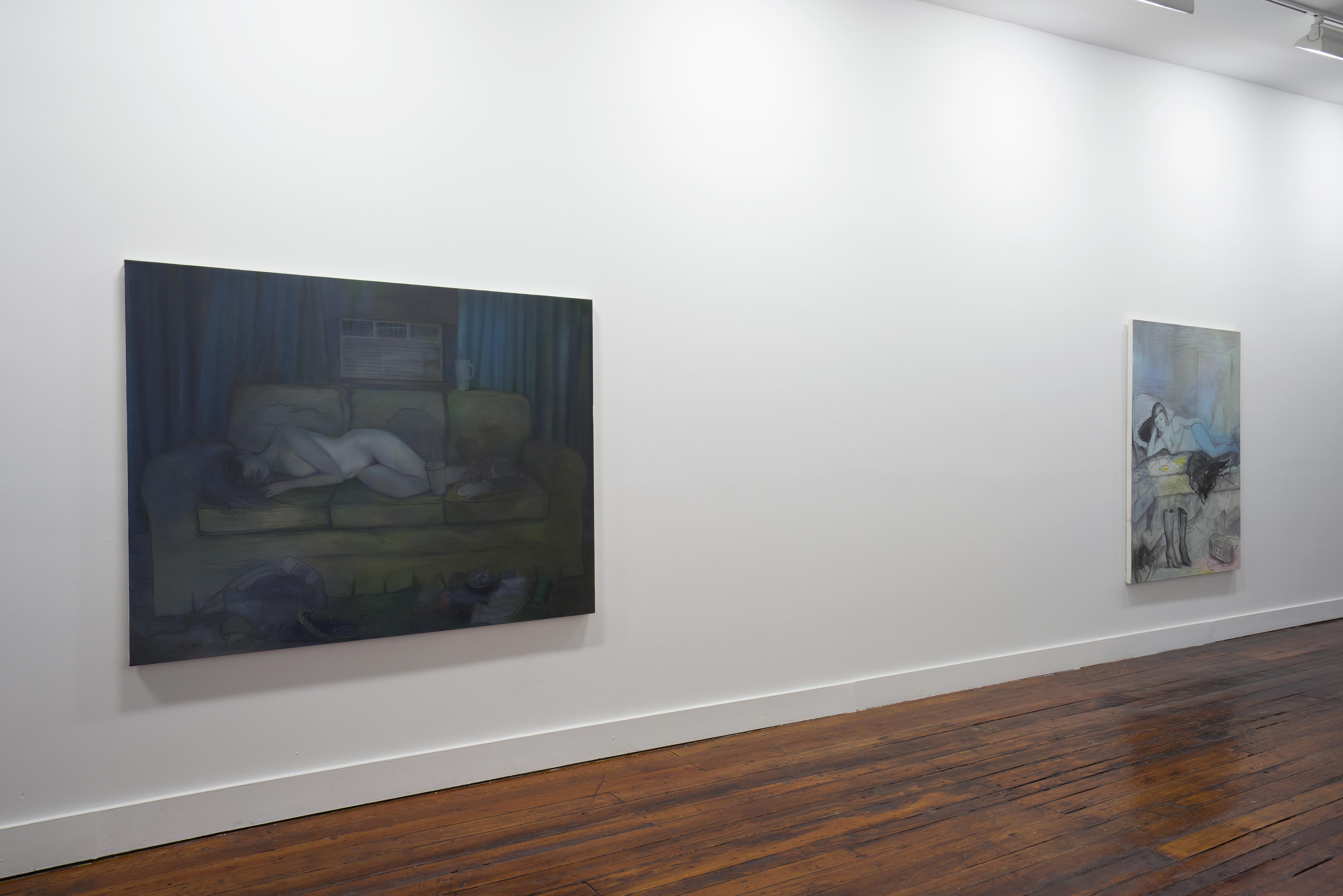 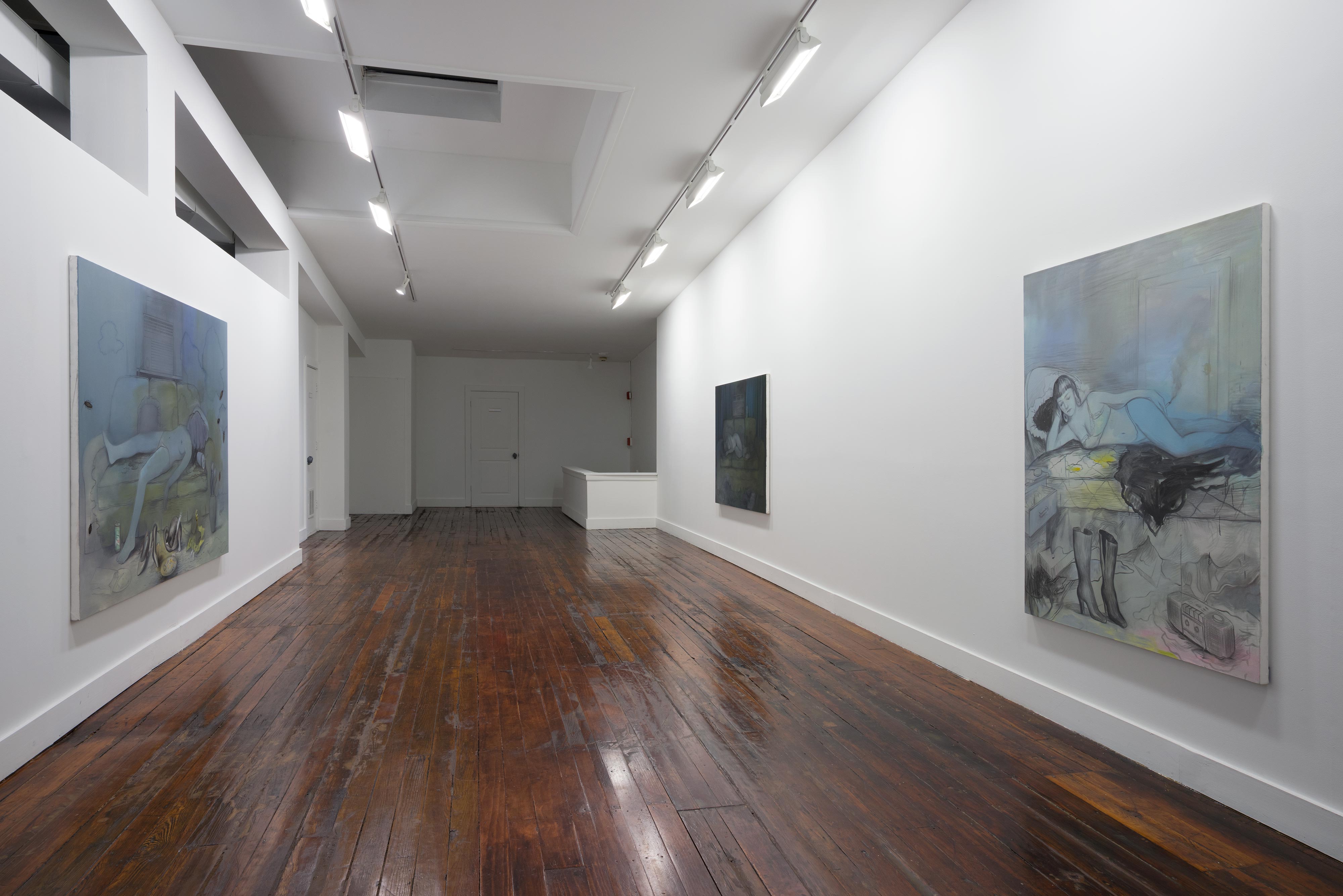 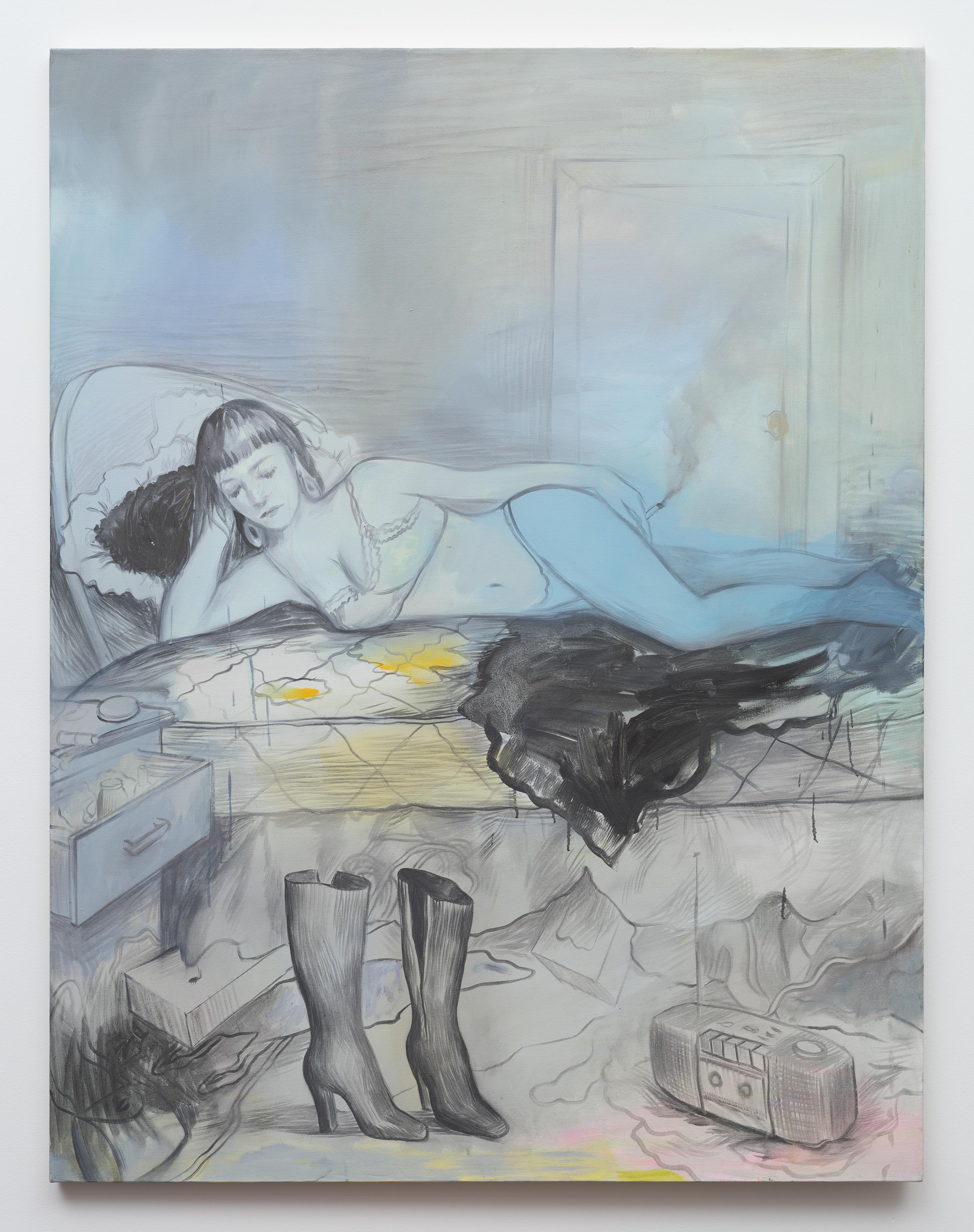 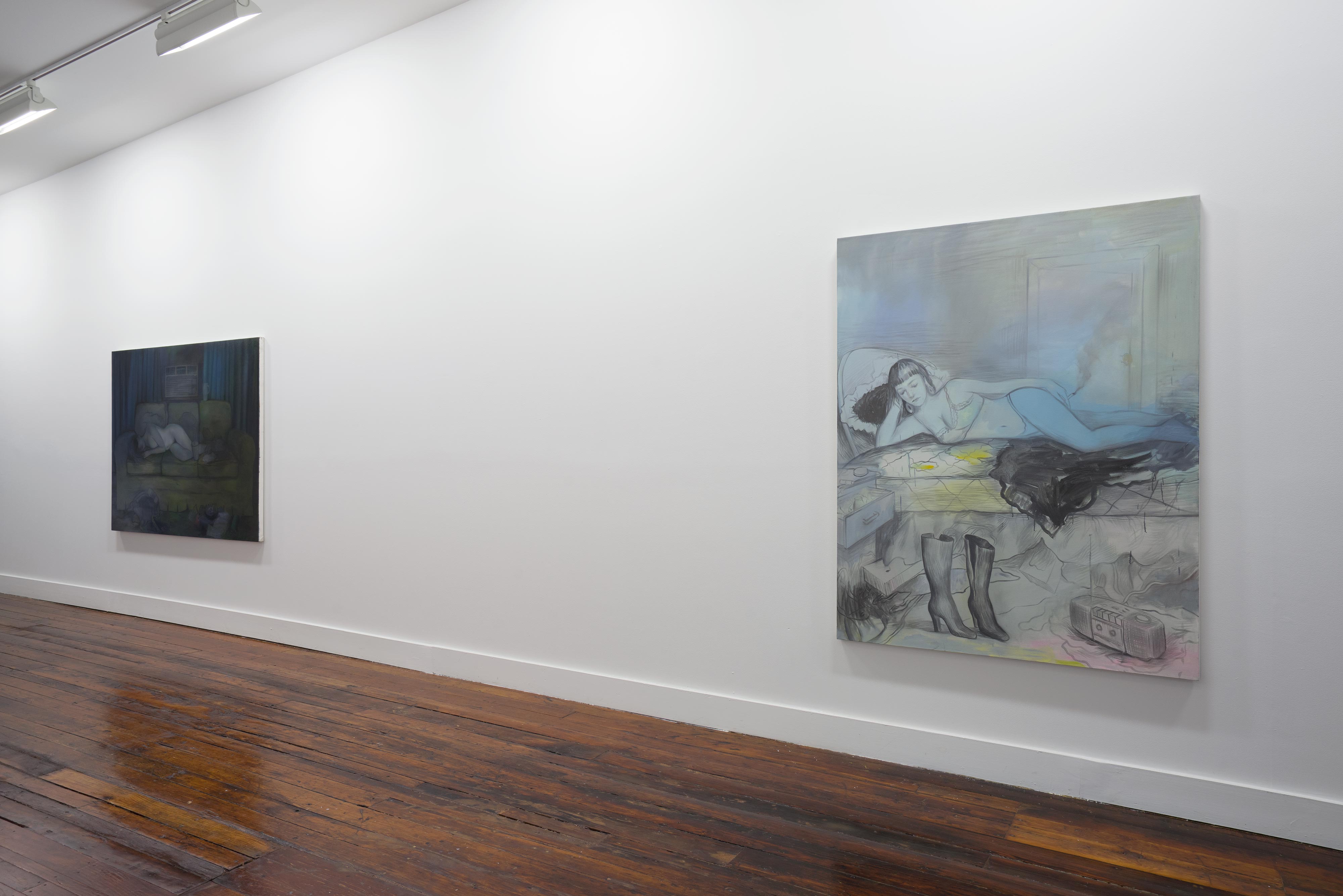 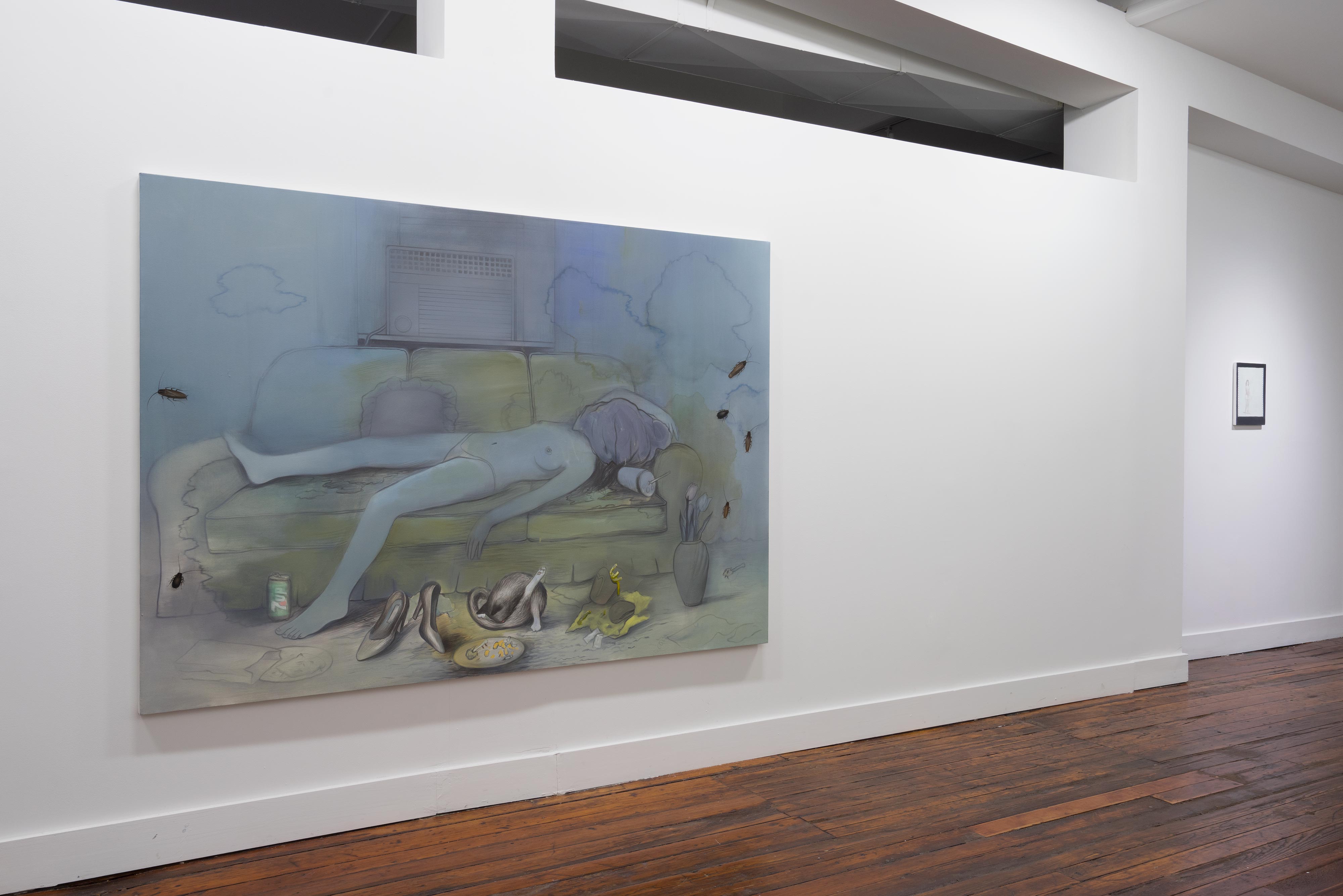 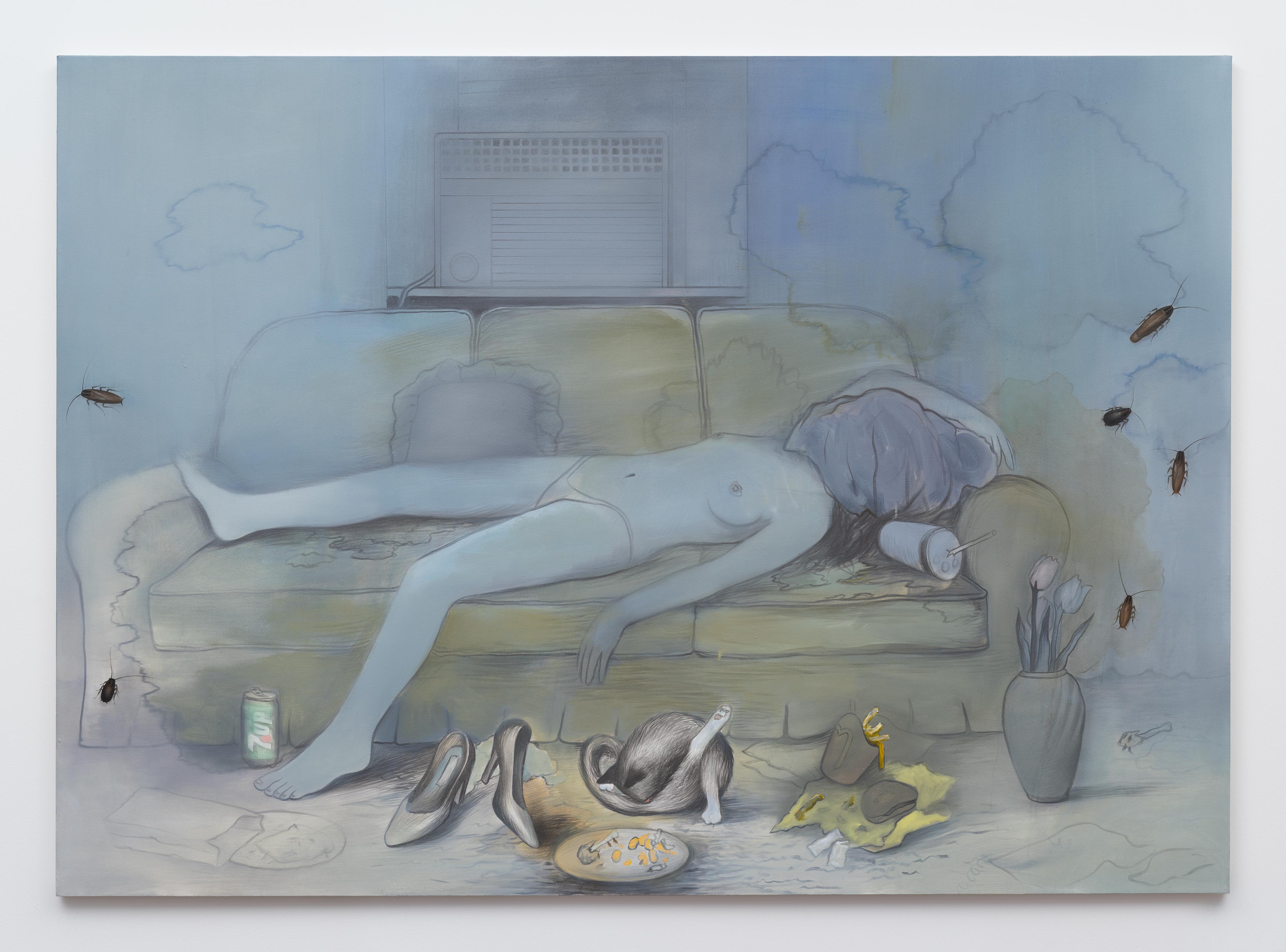 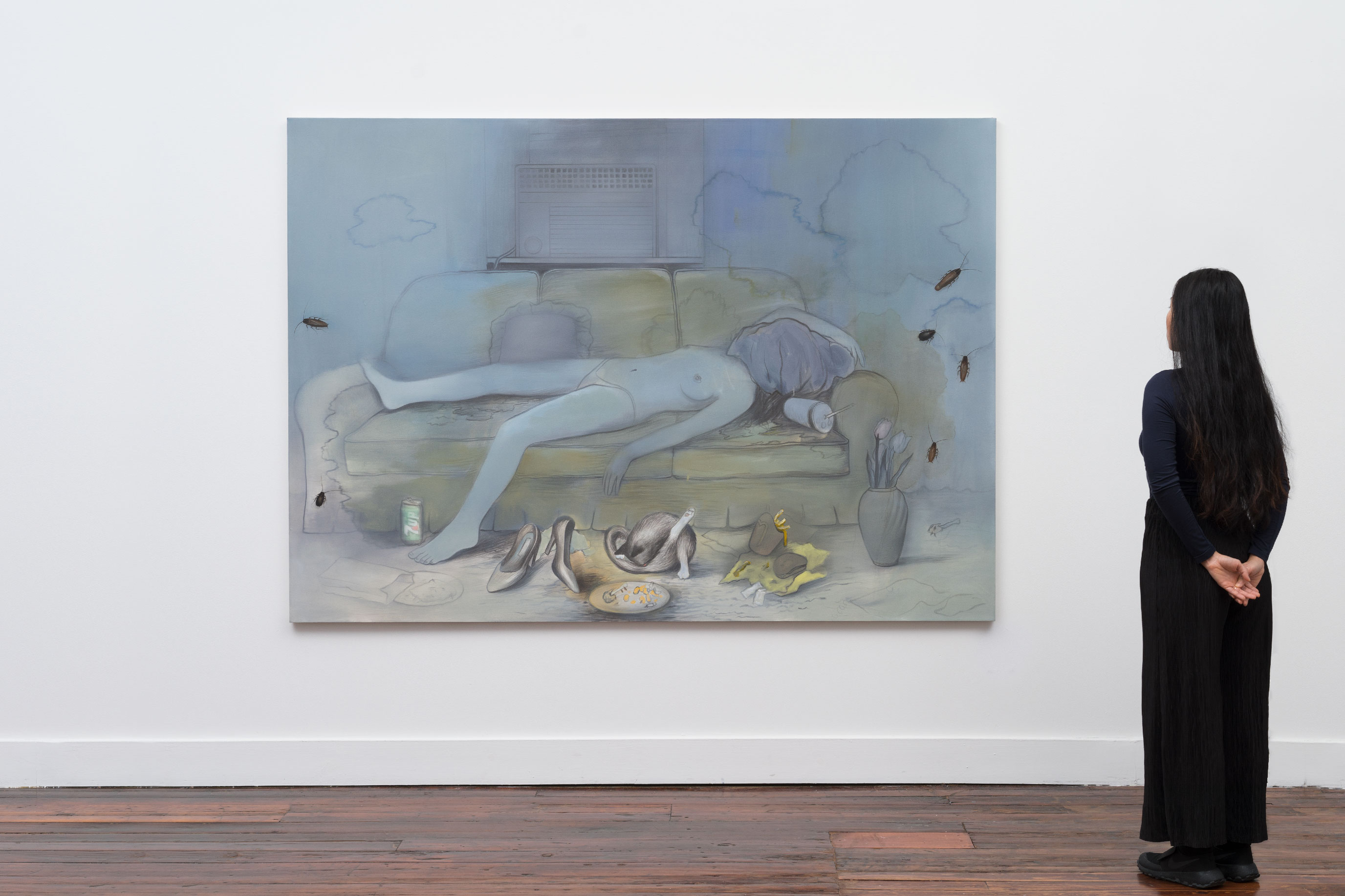 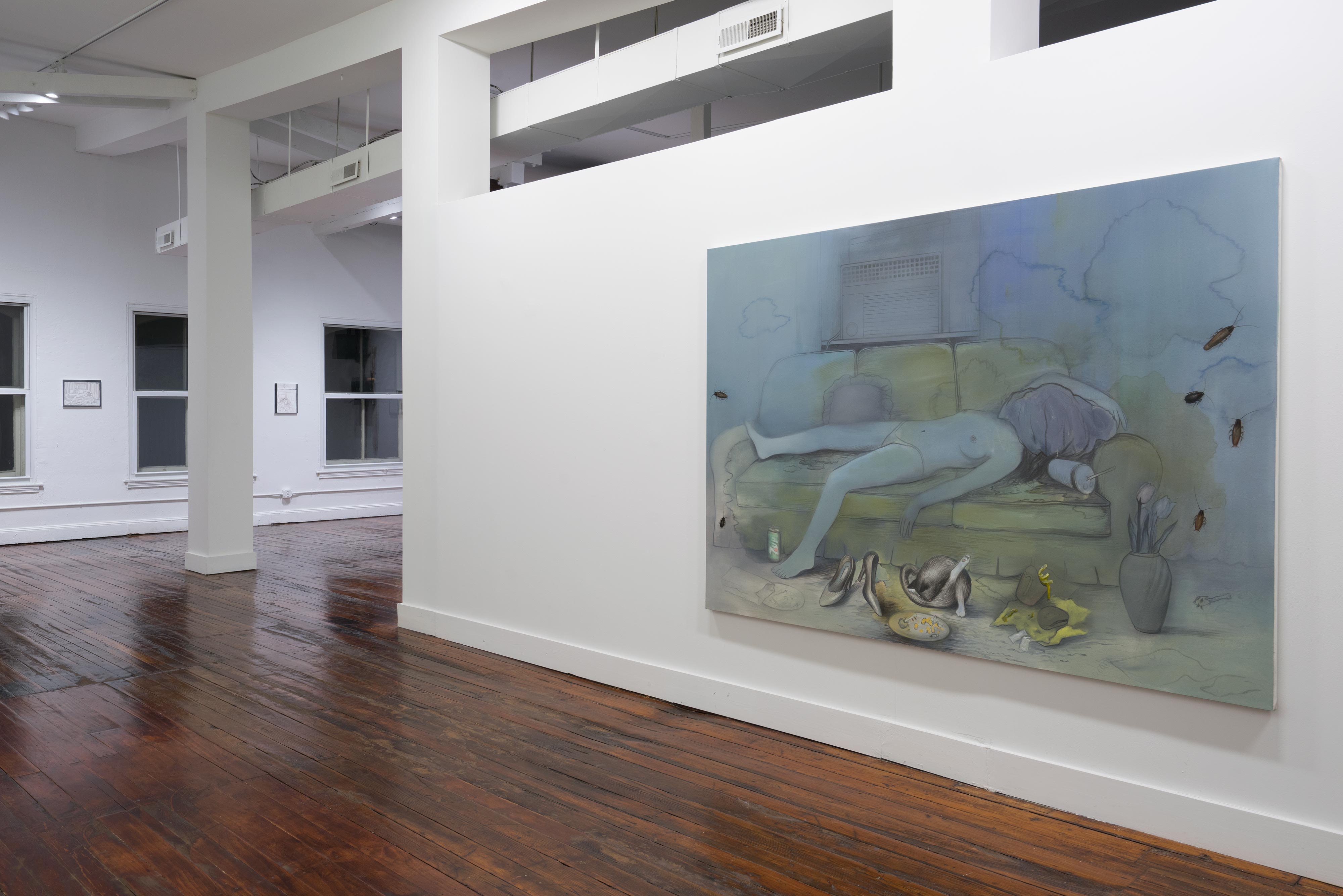 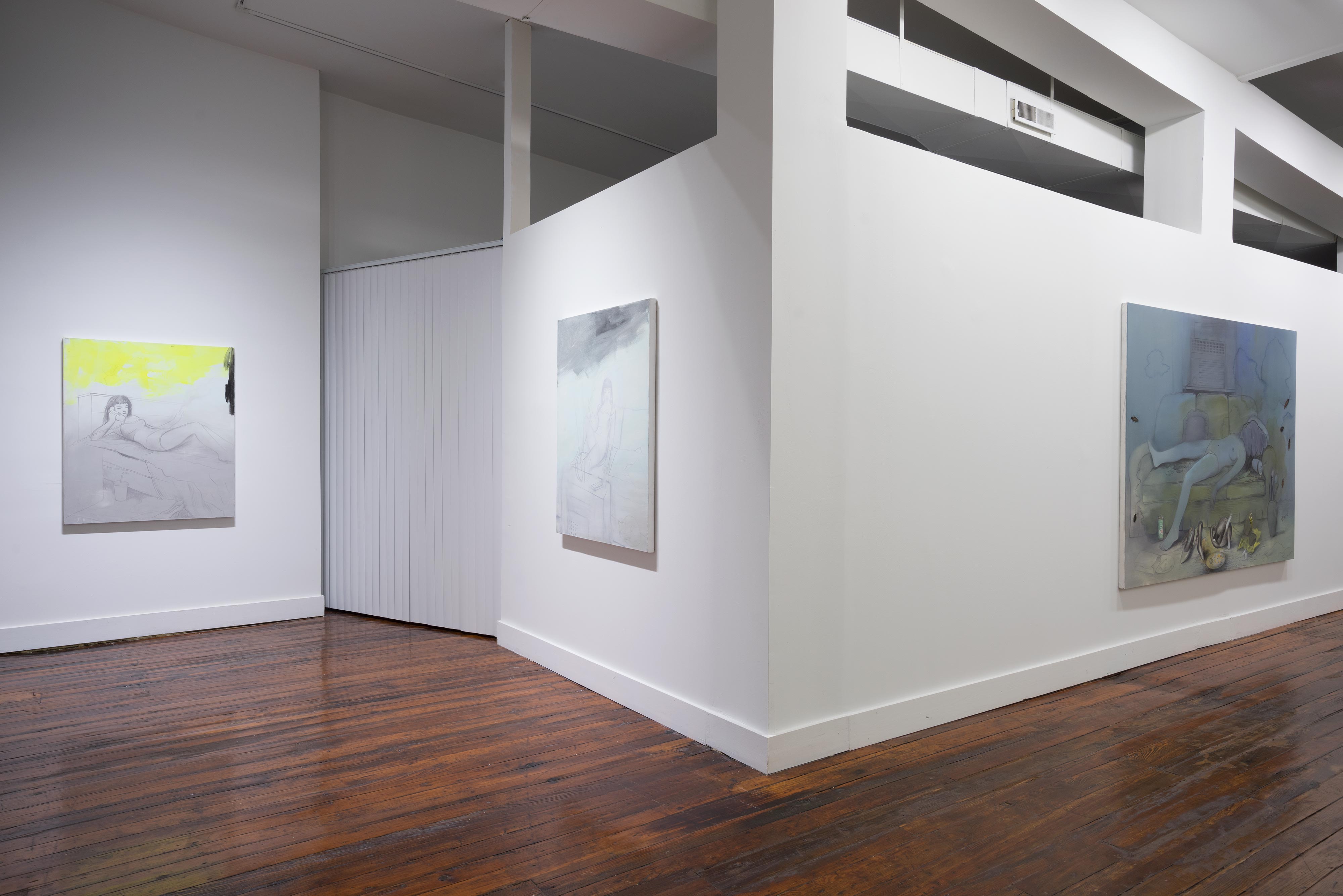 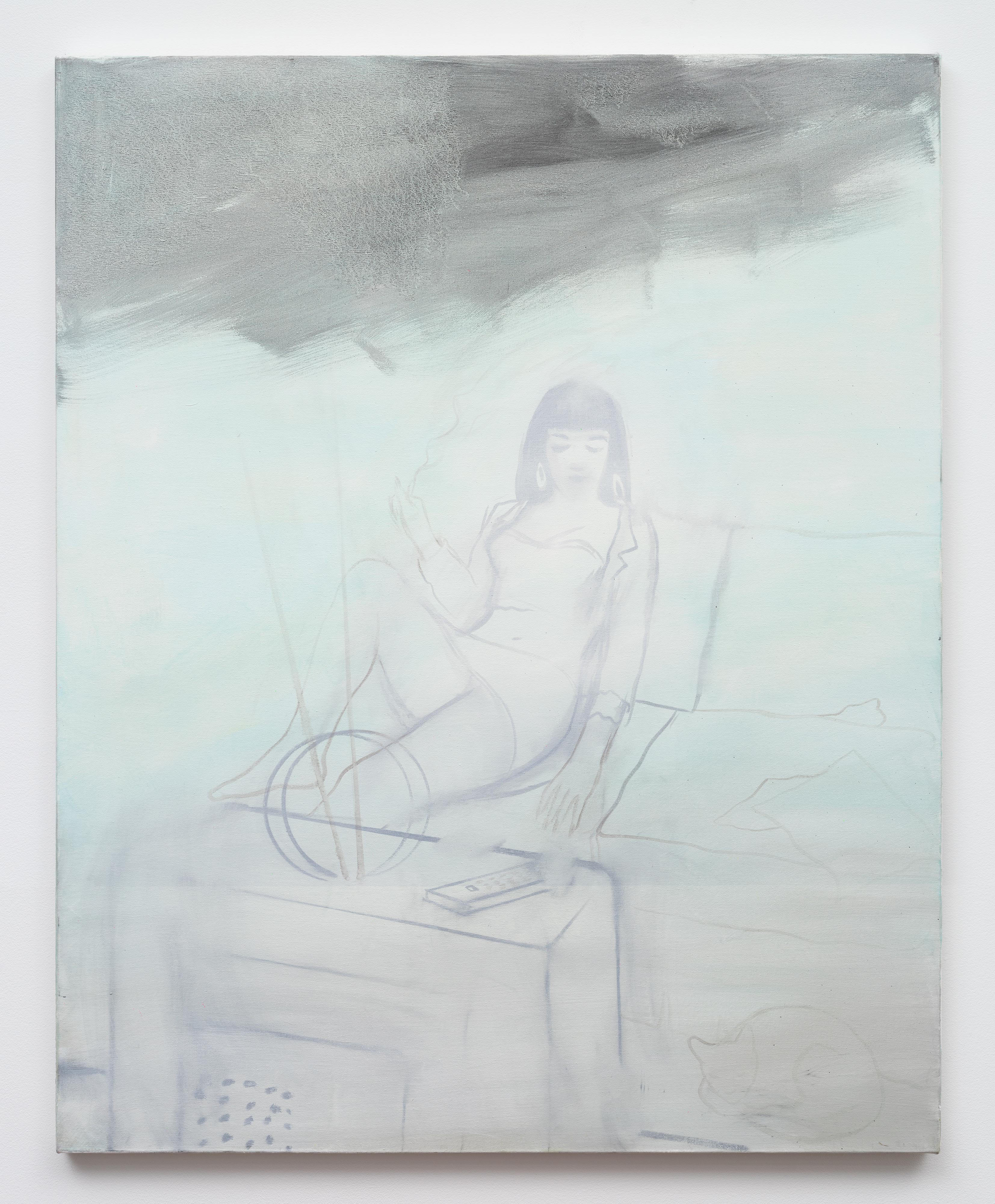 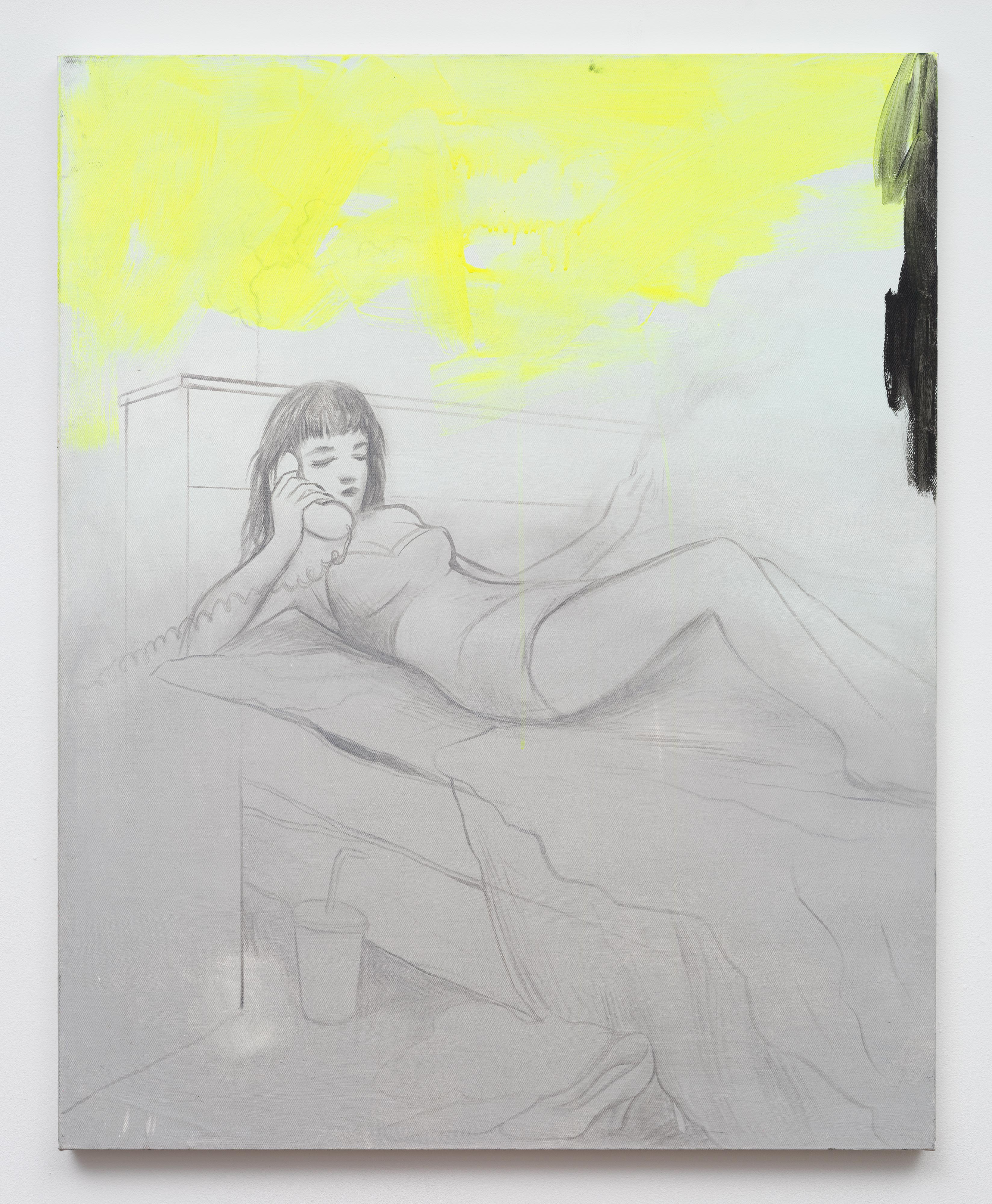 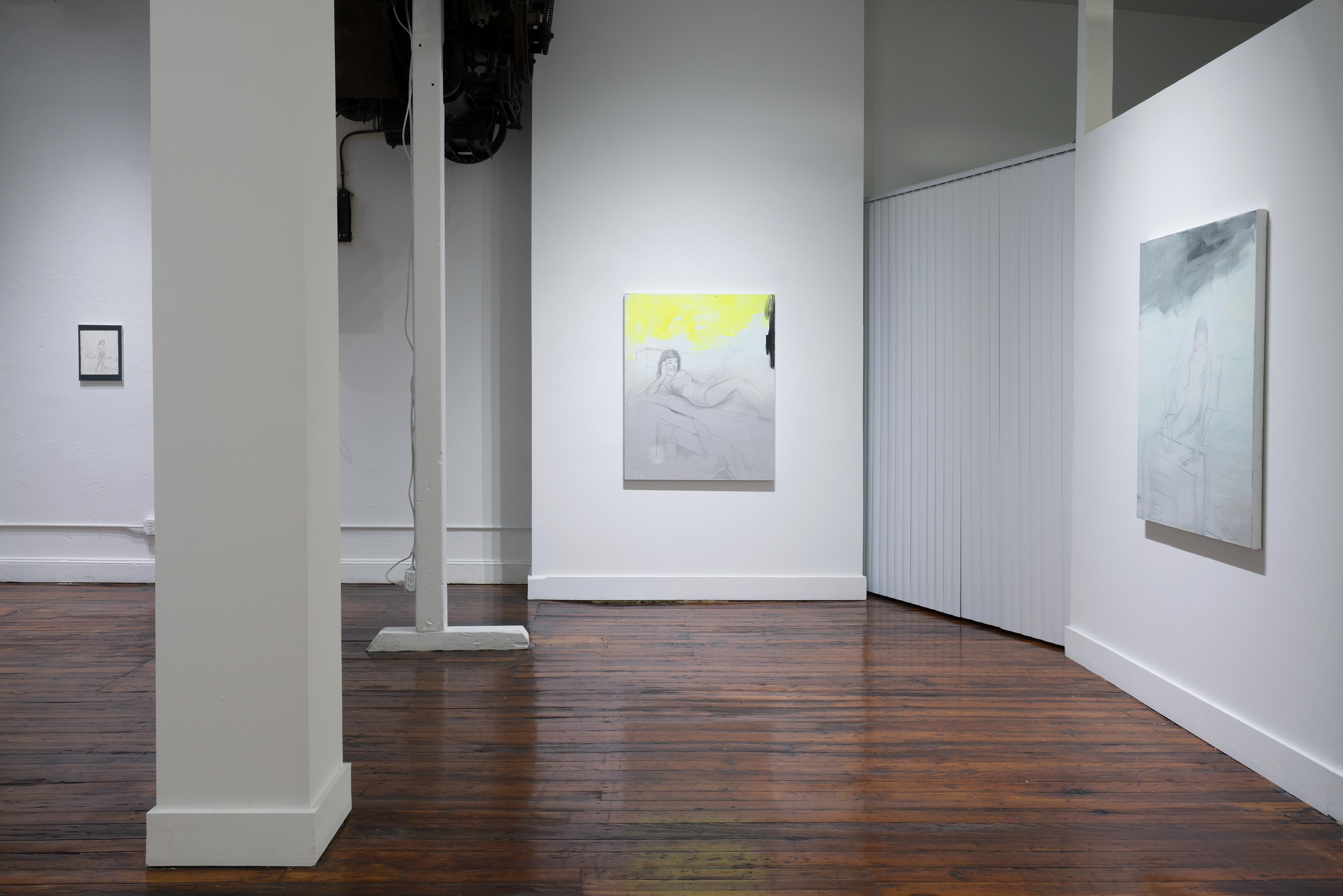 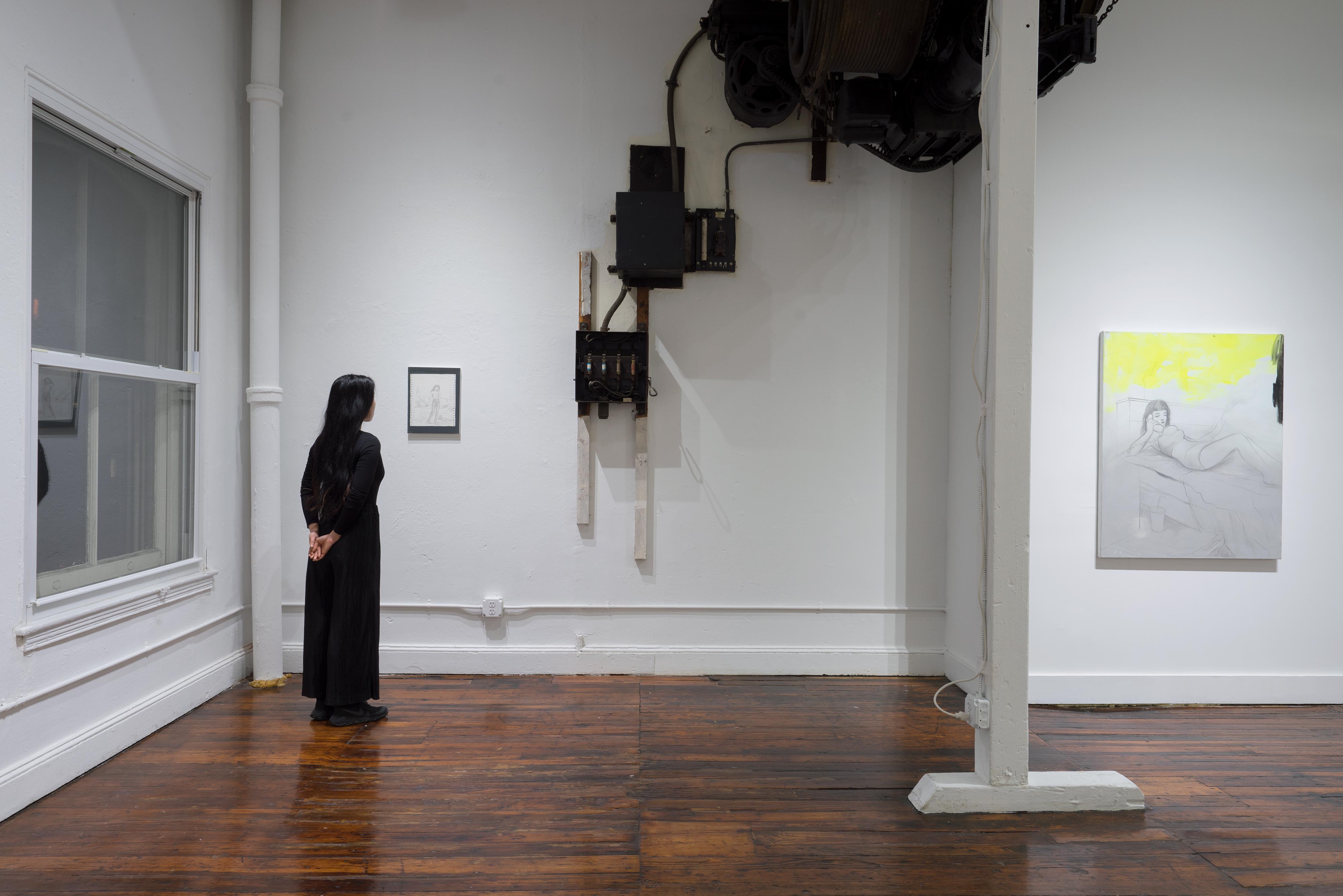 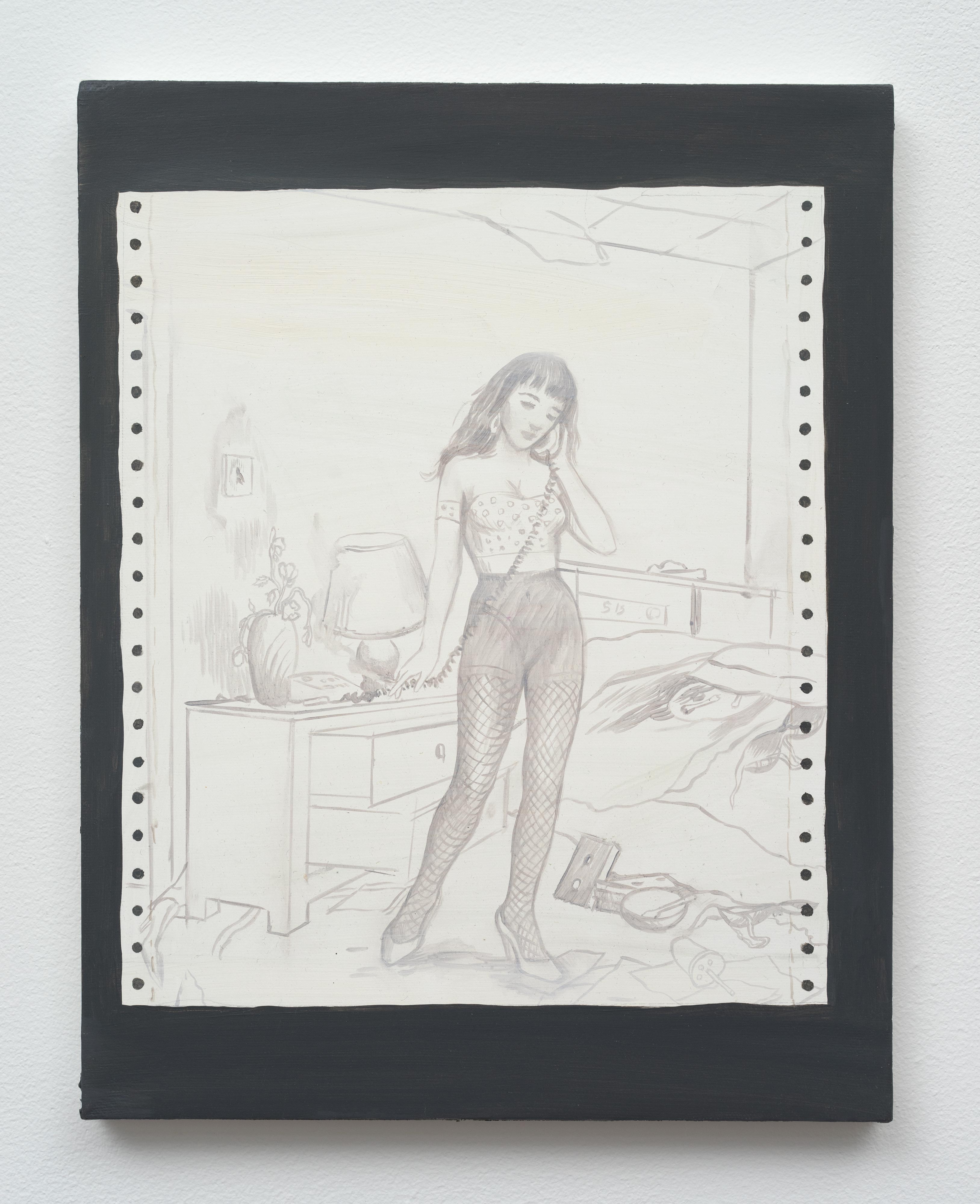 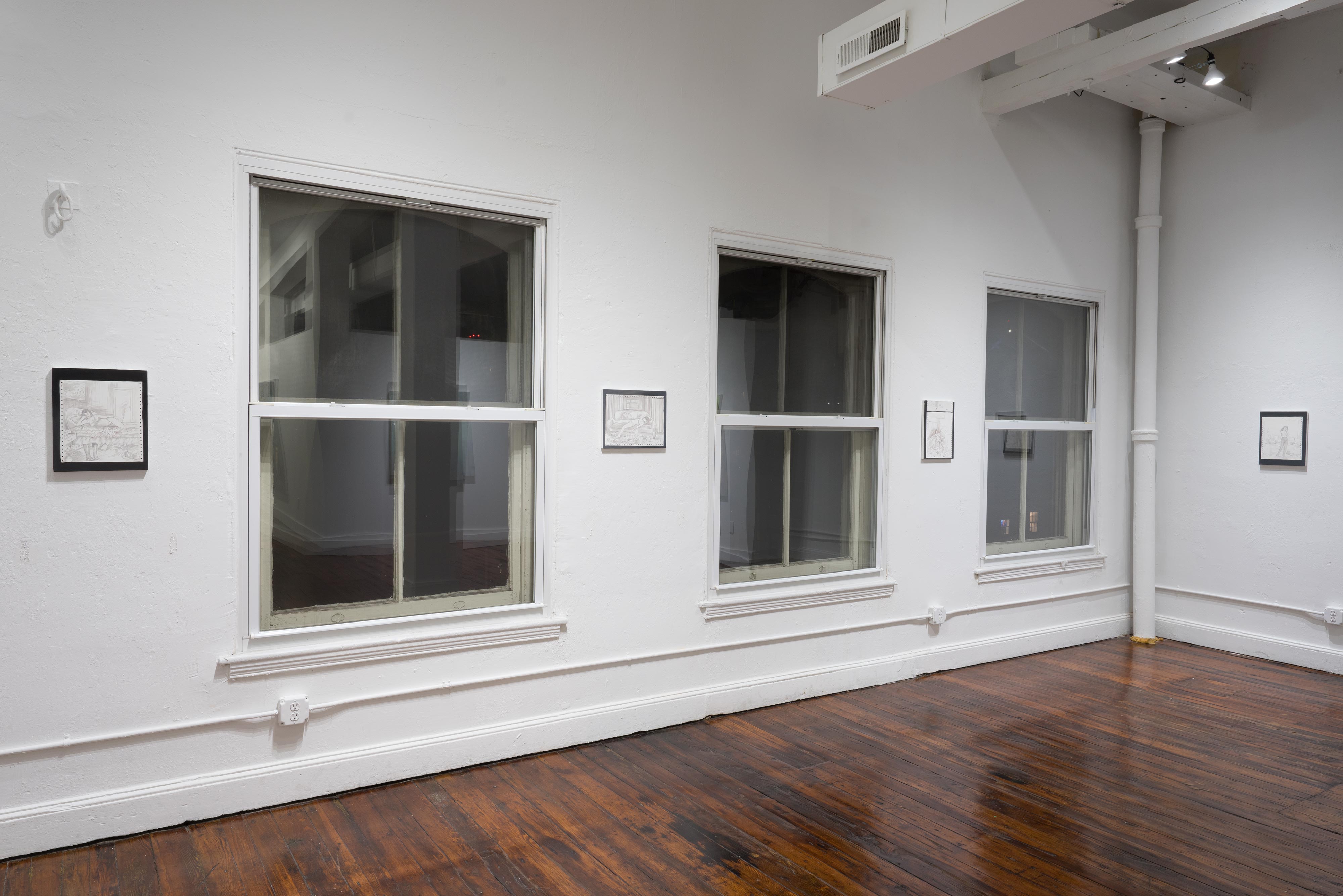 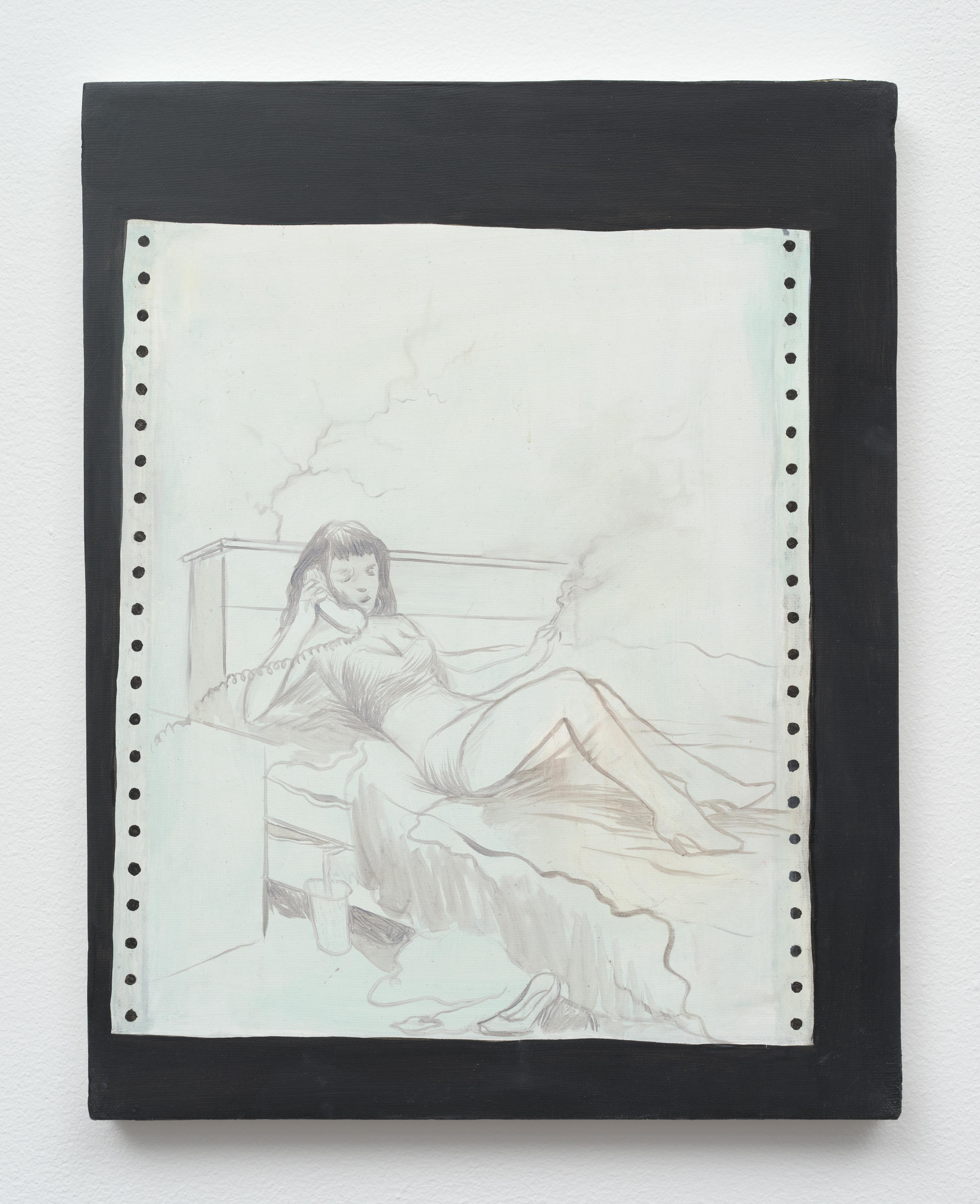 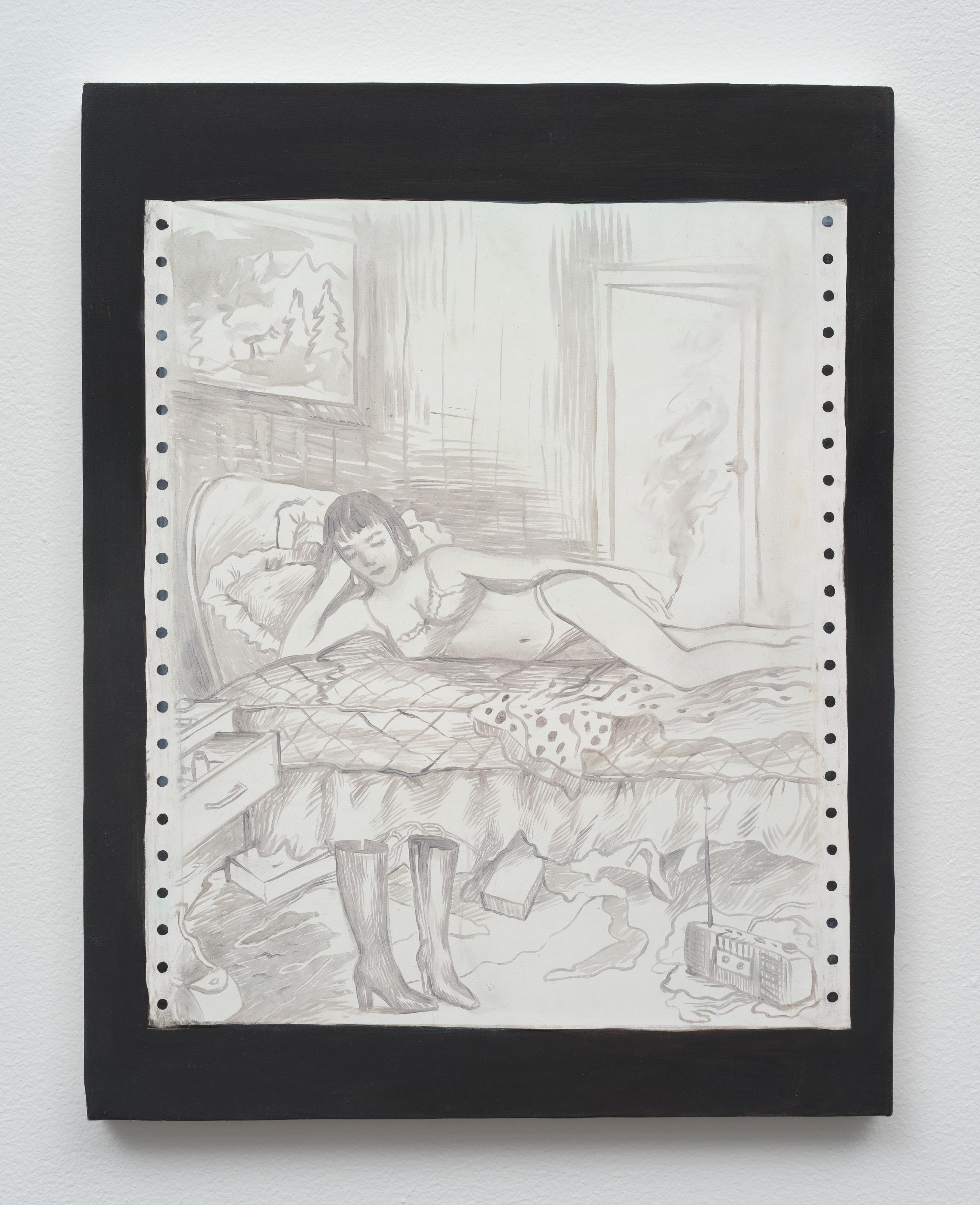 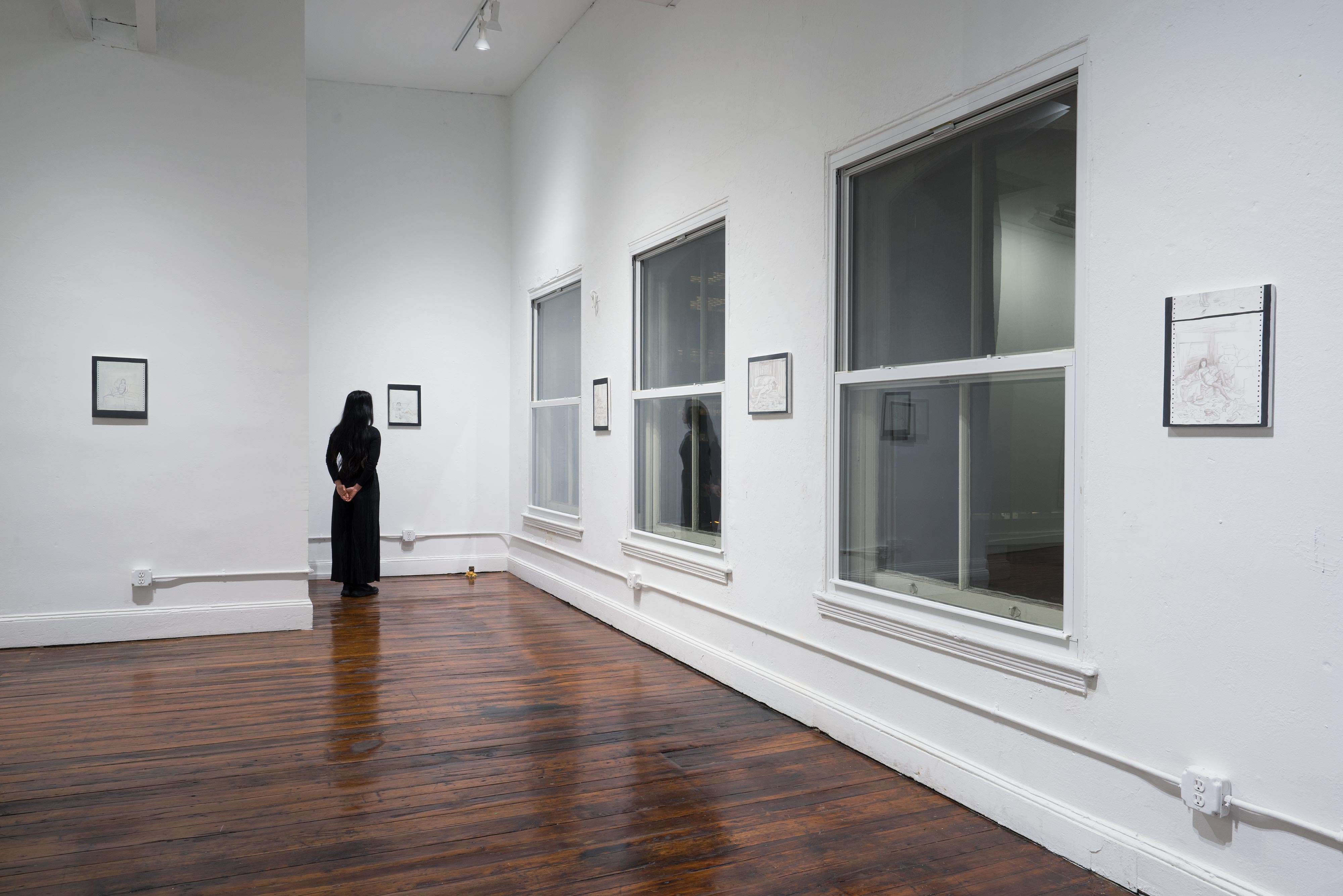 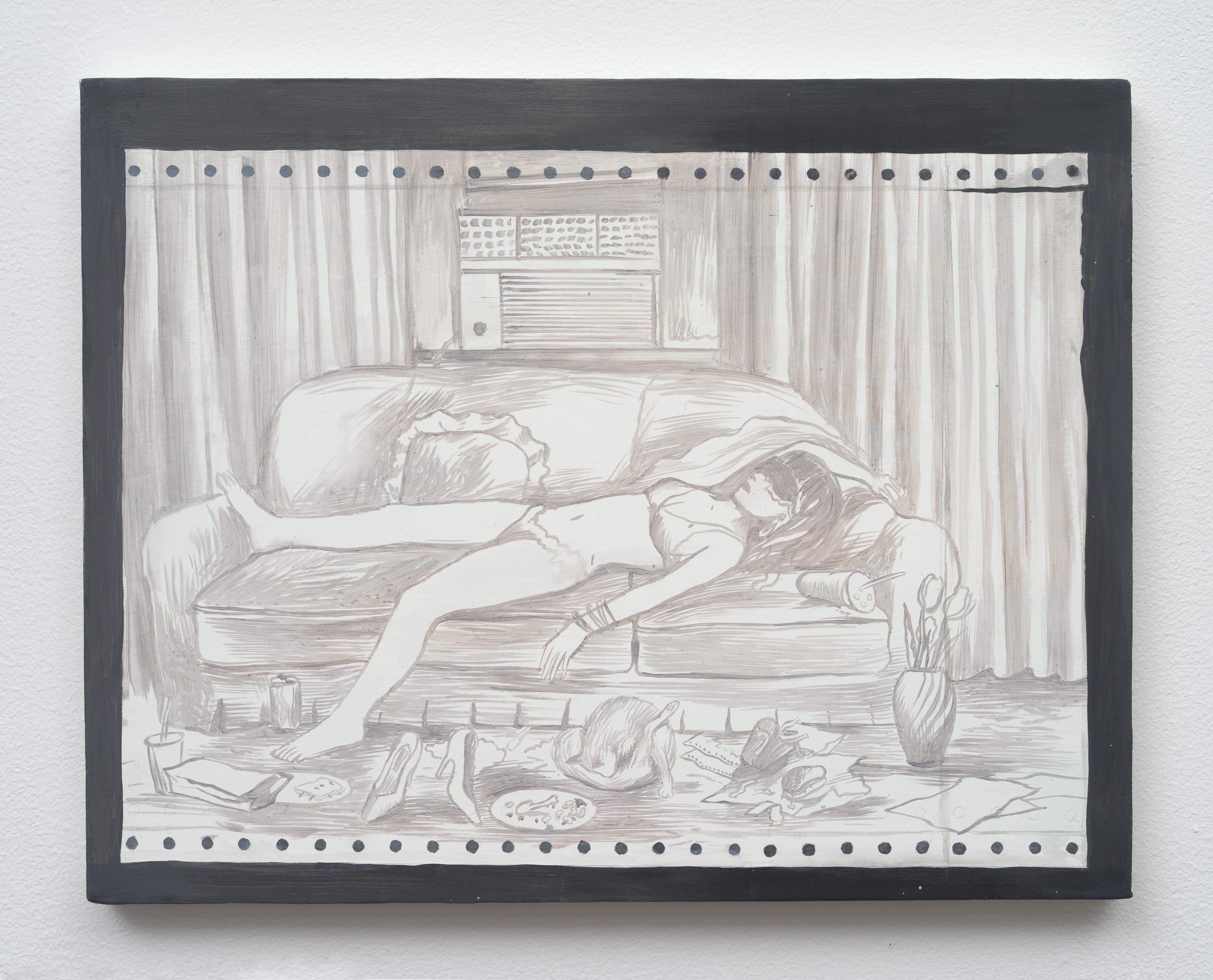 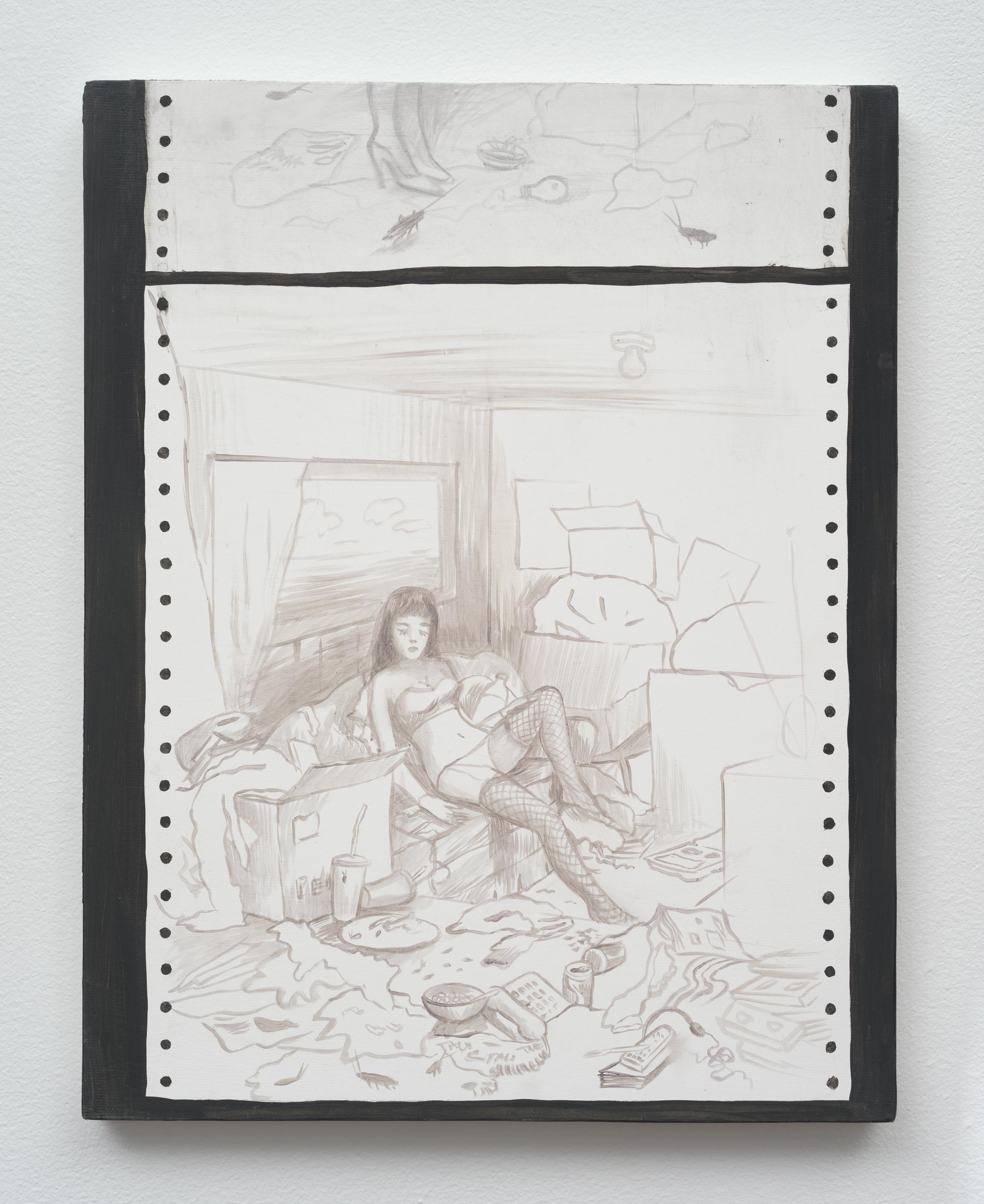 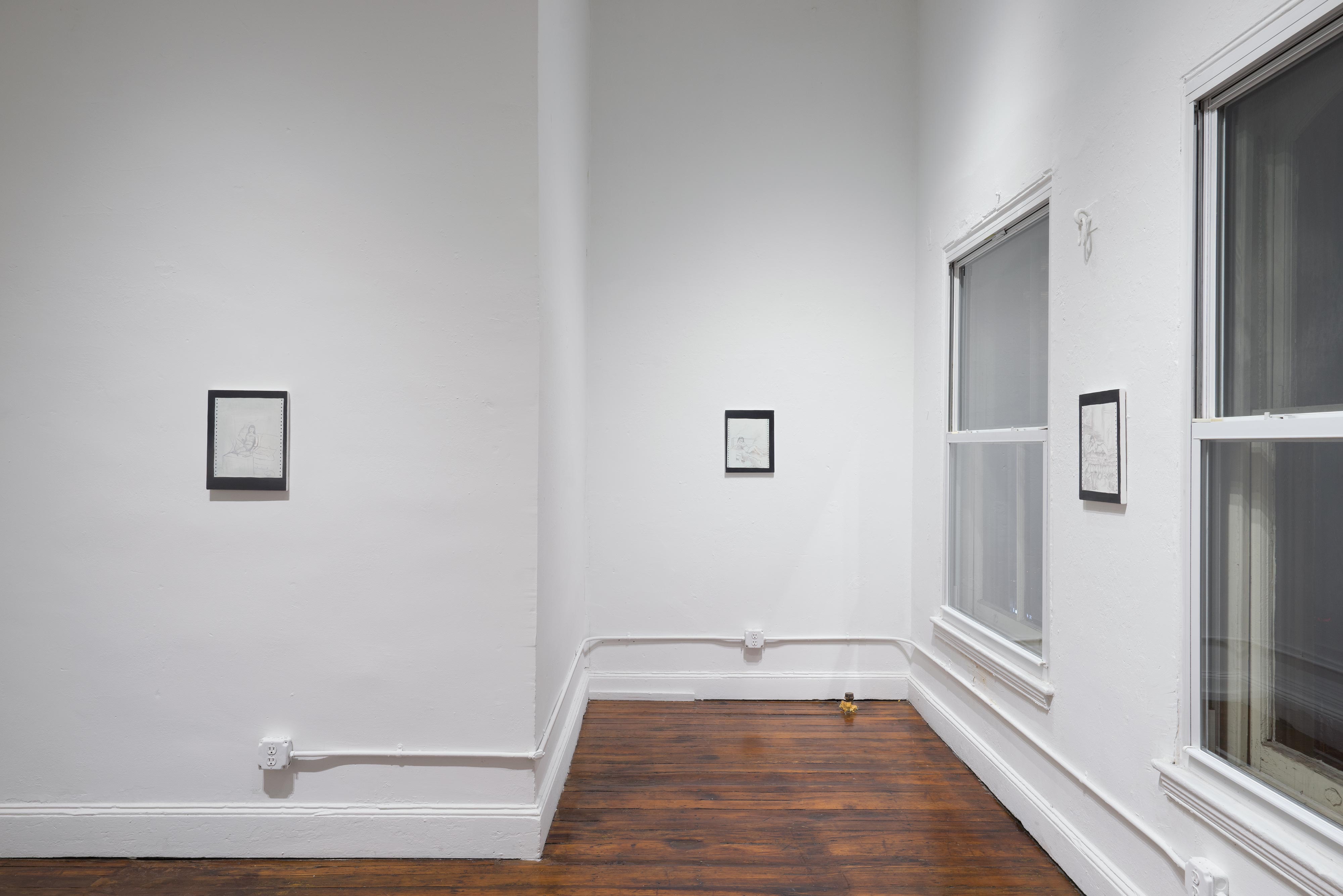 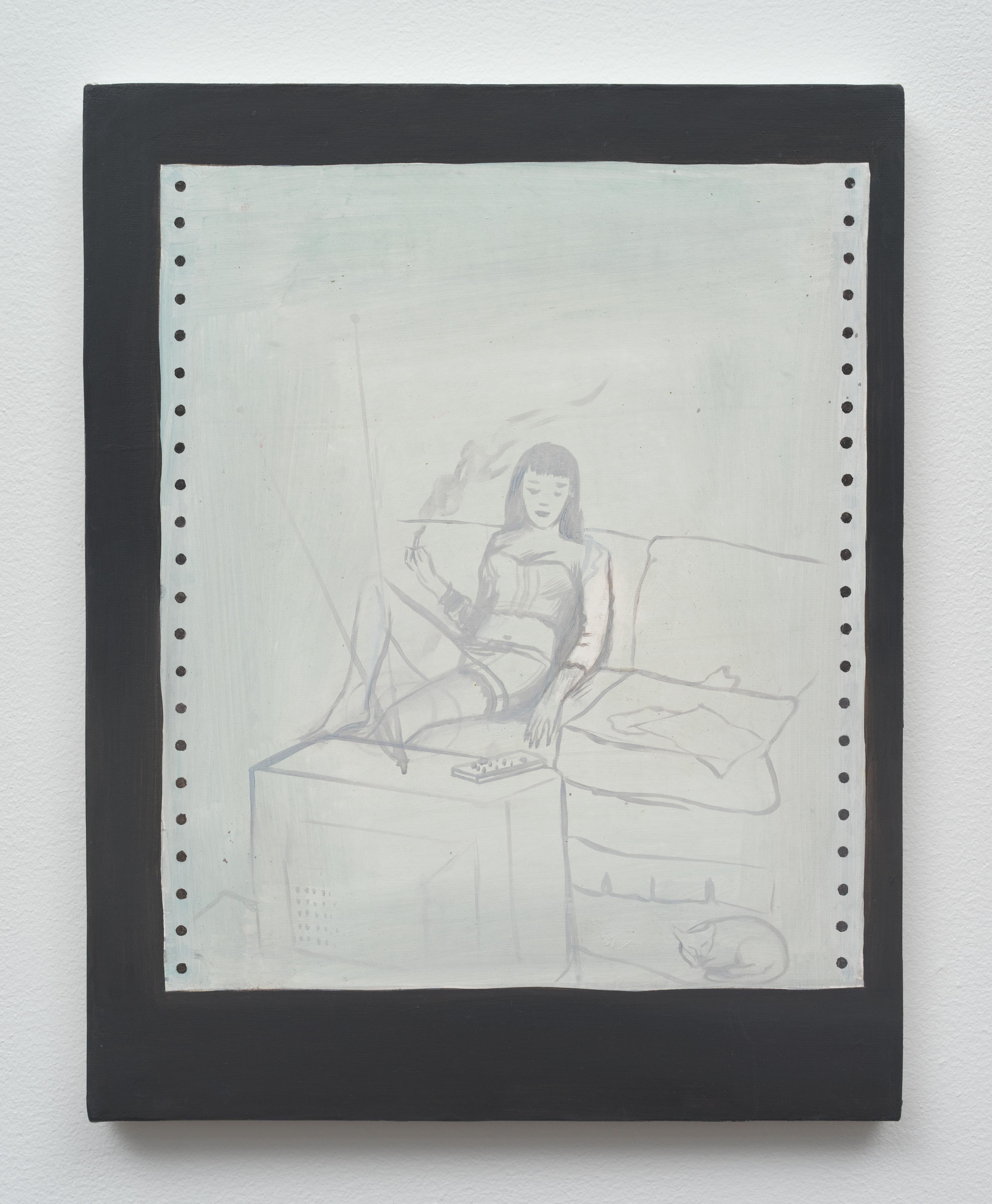 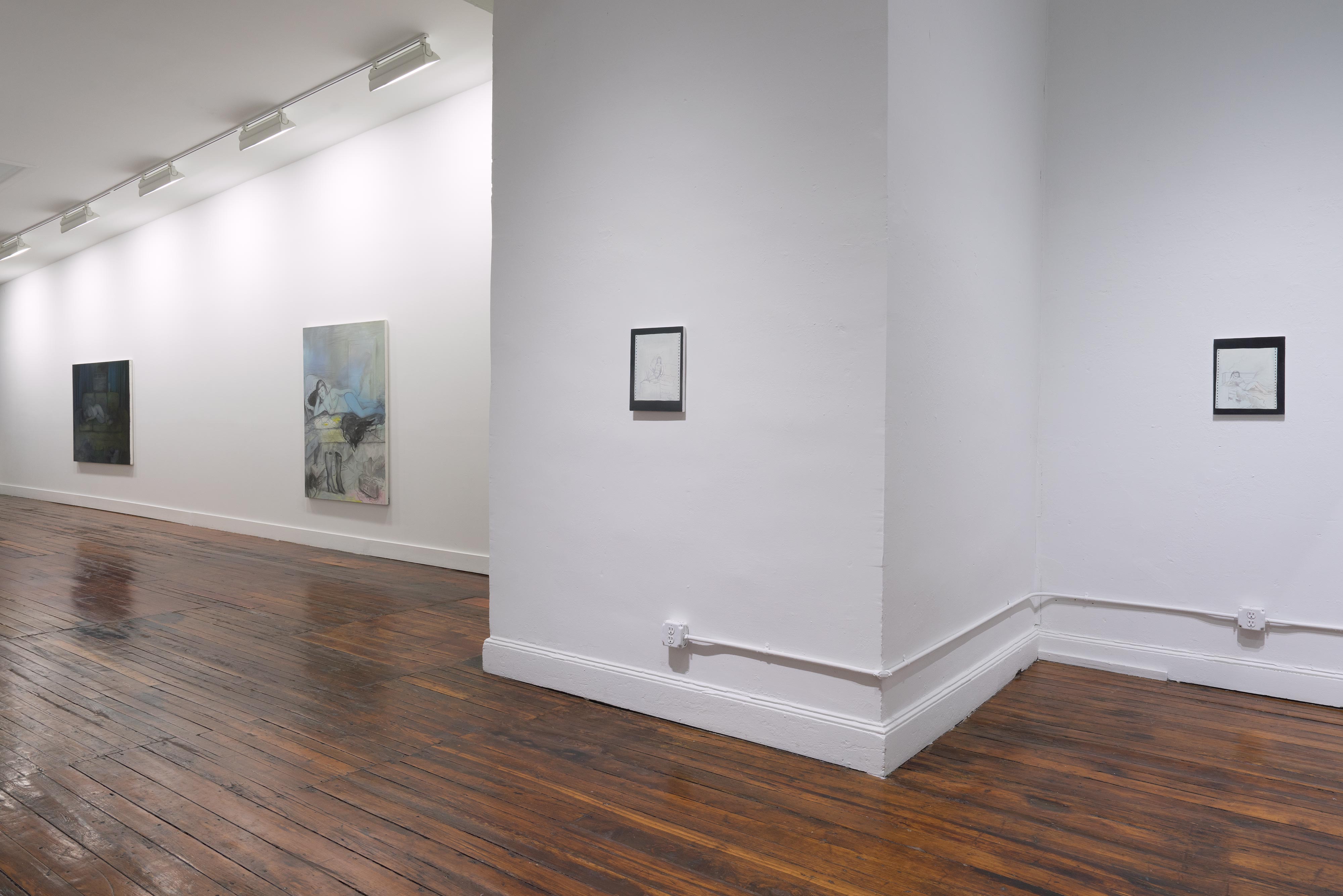 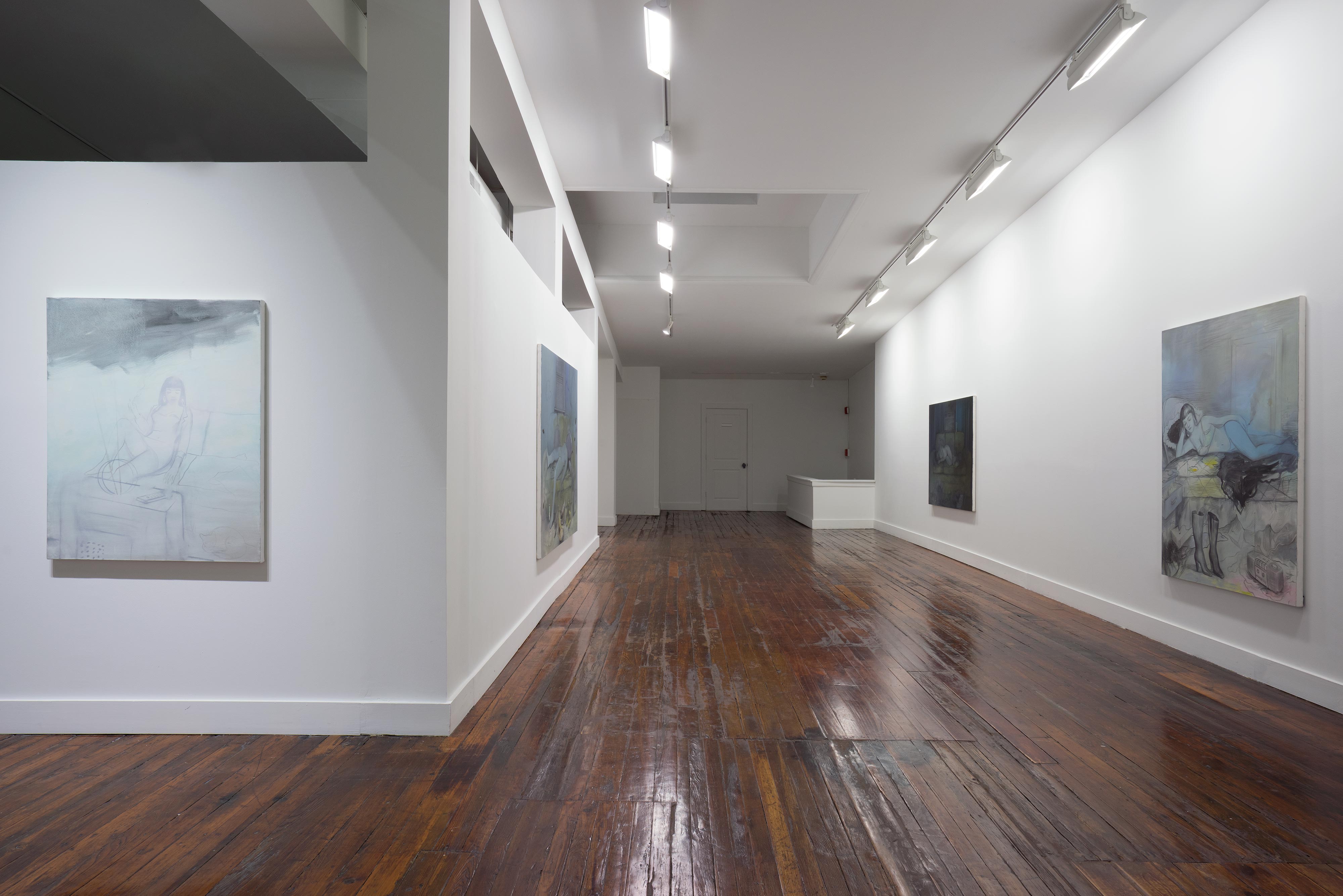 Lord Ludd is pleased to present Imaginary Friend, a solo exhibition of recent paintings by New York based artist Brandi Twilley. This will be the artist’s first solo exhibition in Philadelphia and second time showing with the gallery. The exhibition will open January 6 with a reception from 6pm to 8pm, and will continue through February 11, 2017.

The group of paintings assembled for Imaginary Friend depict a lone female figure in states of repose, variously smoking, dreaming, napping, thinking, lounging in a domestic interior infested with roaches and strewn with refuse.

As a child, Twilley, like many young girls, made casual drawings of innocuous characters like the Little Mermaid and princesses. Around the age of 9, after binge watching TV shows and movies like Angel and Frankenhooker whose plotlines centered around glorified prostitutes, the subject matter of Twilley’s innocent drawings shifted to “sexy ladies,” inspired by characters she did not fully understand, yet whose appearance enthralled her. Using dot matrix printer paper collected from her mother’s job, Twilley drew these sexy ladies in quantity.

None of the original dot matrix drawings survive, but as an adult, the artist sought to revisit the psychological space, which compelled her as a child. In Imaginary Friend Twilley uses memories of those early drawings as a point of departure for deftly executed paintings of female characters, which meld aspects of her contemporary likeness with media-celebrated prostitutes of the early 90s. The domestic setting references the deteriorating home where Twilley grew up, placing Imaginary Friend in direct dialogue with The Living Room a body of work the artist produced concurrently that explored related themes.

Speaking about Imaginary Friend, Twilley states “These images were developed alongside The Living Room a series of paintings of the interior of the house I grew up in, with its dilapidated roof and perpetual mess, and in some ways are portraits of myself contemplating that time. This work helped me rediscover an intuitive way of working, using my imagination and free association, in order to remember and recreate the house, which burned down when I was 16. When I began I was trying to reconnect with the uninhibited way I worked as a child before discovering other ways of working. Some images are more based in memory and a version of my childhood environment and others incorporate more of the fictional elements of the drawings I made as a 10 year old.”

The series exists in two scales: small paintings based on the memory of the original sexy lady drawings reproduced at a 1 to 1 ratio, and large works, which show an expanded view of the world in the smaller paintings, complete with life size figures and 5 inch roaches.

Brandi Twilley (b. 1982, Oklahoma City, OK) lives and works in New York. She received her MFA in Painting from the School of Art at Yale University and her BFA from The Art Institute of Boston at Lesley University. Recent exhibitions include The Living Room at Sargent's Daughters, New York, The Landscape Changes 30 Times, Anahita Gallery, Tehran, Iran, and Family Portraits at Hood Gallery, Brooklyn.
branditwilley.com